CORRUPTION WILL NOT BE ALLOWED TO DESTROY THE GOOD EFFORTS OF NIGERIA-FG.

The Permanent Secretary of the Ministry of Science, Technology and Innovation, Mrs. Monilola Udoh has said that Federal Government will not allow corruption to destroy the country. 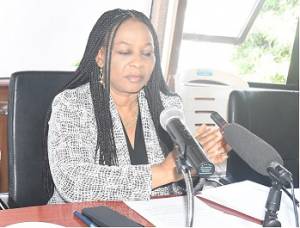 The Permanent Secretary pointed out that lack of transparency and accountability in our daily operations promotes corruption which has continued to retard socio- economic growth and good governance in the country.
She also said that Law Enforcement Agencies need to be supported and encouraged  in order to eliminate  corruption in the country.
According to Monilola, ‘’We need to promote and sponsor more programs and activities that empower our institutions to achieve their mandates’’.

Earlier, the Chairman of ACTU of the Ministry, Mrs Stella Igwilo, said that the fight against corruption is a collective responsibility of all staff of the ministry and therefore appealed for a sincere commitment.

Speaking, the Director Public Enlightenment and Education Department, Independent Corrupt Practices and Other Related Offenses Commission (ICPC) Abuja, Mohammed Ashiru Bobafa, during his paper presentation titled ‘’Overview of the ICPC National Ethics and Integrity Policy’’, stated that  the fight against corruption can be won, if we adhere strictly to the public service seven core values of ethics and integrity which include human dignity, voice and participation, patriotism, personal responsibility, integrity, national unity and professionalism.